You are here: Home / Work / Musicals / Beauty and the Beast

Remained 13 years playing in New York, BEAUTY AND THE BEAST was nominated in nine categories to Tony Awards® in 1994. Having become a classic international stages Broadway musical has played in 21 countries, 148 cities and has been translated into 8 languages.

Alexis Loizon interprets the role of Gaston, that he coveted from a young age. 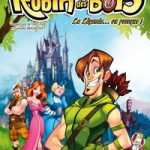